Manual coffee makers offer a cheaper, more versatile and fun, and often higher-quality alternative to standard drip coffee. They were particularly popular for coffee lovers that lived alone or traveled frequently. For decades, the French press was the fan favorite for easy-to-use manual coffee makers, but a challenger has entered the stage.

Now, it all comes down to AeroPress vs French press. Which of these manual brewing methods offers the easiest, cheapest, fastest, and most delicious coffee. And which one should earn a spot on your kitchen counter.

What Is the AeroPress?

The AeroPress is a recent addition to the home barista arsenal. It’s the brainchild of Alan Adler, a coffee enthusiast that set out in 2004 to make an inexpensive, lightweight hand-press coffee maker.

The AeroPress consists of a chamber and a plunger that fits into the chamber. Without the plunger, the process would be somewhat similar to a pour-over coffee maker. Instead of relying purely on gravity to pull the water through the grounds, though, the plunger is used to apply pressure.

That little change, combined with the use of finely-ground coffee, speeds up the brewing process to about 90 seconds and allows you to brew a coffee concentrate instead of a normal strength brew. Because you need finely ground coffee, AeroPress users often opt to buy a coffee grinder, although you can also just purchase espresso-ground coffee.

The AeroPress has gained a devoted following in recent years for both home and travel use. Its durability and compact setup make it perfectly suited for travelers and campers. The company even released a special travel version, the AeroPress Go, that includes a built-in travel mug.

It’s hard to find a cheaper coffee maker than the AeroPress. It’s especially hard to find one that produces the quality coffee of an AeroPress, brews in under three minutes, and is as easy to use and clean as the AeroPress. That’s why it has become a fan favorite for coffee connoisseurs that don’t need a high-capacity coffee pot.

What Is a French Press?

The French press is a classic coffee maker, dating back to a patent filed by the Italian designers Attilio Calimani and Giulio Moneta in 1929. Since then, several companies have developed their own version of the French press, and you can now find them in all shapes, sizes, and materials.

The main chamber of a French press typically looks like a pitcher with a handle. The lid includes a plunger with a filter at the end that sticks into the pitcher. Unlike with the AeroPress, the plunger doesn’t take part in the brewing process. It’s just used to filter the grounds out of the coffee afterwards.

The best coffees for French press should be coarsely ground — anything finer than that would not be properly filtered. Given the coarse grounds and lack of applied pressure, the French press brewing process is slower (about 4-5 minutes) than with an AeroPress. Since most ground coffee is sold as a drip grind, most French press users opt to buy a French press coffee grinder.

Because of the wide range of sizes and materials, you can easily find a French press that fits your needs. There are small, durable models that are excellent for travel, but there are also larger models that can easily make coffee for the whole family.

What Kind of Coffee do AeroPress and French Press Make?

French press coffee is rich, bold, and thick. The heavier body and stronger flavors are divisive amongst coffee lovers, as are the extra oils and grit that often make their way into the cup. Some find that the delicate, complex flavors of the beans are overwhelmed in this brewing style. French press fans, however, tend to find other coffee brewing methods boring or bland by comparison.

AeroPress coffee is light, delicate, and clean. It’s more flavorful than drip coffee, but the flavors are less muddled than in French press coffee. Since the AeroPress brews coffee concentrate, you have a bit more option in how you drink it.

Both the AeroPress and French press offer flexibility in brewing style. The French press can even be used to cold brew coffee. Most of the advanced AeroPress recipes require using the inverted method, which can take more practice to get right. Once you do, though, you can even make AeroPress espresso, which is a much better espresso imitation than French press espresso.

French press coffee extracts more than just extra flavor from the grounds. It also has more kahweol and cafestol, two chemicals that have been shown to raise LDL cholesterol levels. The difference is not enough to drive most coffee drinkers away, but it could be important if you already have high cholesterol.

Is AeroPress or French Press Easier to Use?

Using the AeroPress is fairly simple. You just add fine (or medium-fine) coffee grounds on top of a small, paper filter at the bottom of the brew chamber. The chamber is placed directly on top of a mug, mason jar, or similar container. Then, you pour hot water into the chamber, stir the water and grounds for several seconds, and plunge to apply the pressure that extracts the grounds and pushes the coffee into the mug.

To use a French press, coarsely ground coffee and water are added to the chamber. The grounds are left to brew immersed in the water for several minutes, after which the plunger is used to press the grounds away from the brewed coffee. Notice that the brewing process itself does not use applied pressure, instead brewing occurs just by allowing the grounds to stay in contact with the water.

The hands-off nature of French press brewing is a big advantage. The process takes longer than brewing with an AeroPress, but you can easily set it and forget it. Neither is particularly difficult physically, but the French press plunger takes even less effort than the AeroPress. Overall, the French press wins for ease-of-use.

Cleaning the AeroPress vs French Press

The AeroPress plunger compresses the coffee grounds into a puck that pushes right out the bottom after you remove the filter cap.  You can just dump the puck in the trash or compost along with the paper filter. You’ll still want to rinse the entire rig, but the entire cleanup process is over in about 30 seconds.

French press plungers also compress the grounds, but there is no easy way to dump them out. Instead, you’ll have to manually dig the grounds out of the bottom of the carafe. The grounds tend to accumulate in the filter and plunger, so you’ll have to dissassemble it for a deeper cleaning at least every couple of weeks. You’ll also need to lightly wash the pitcher after each use.

There’s no question who wins this category. The AeroPress offers the easiest cleanup of any coffee maker I’ve seen.

Capacities of AeroPress and French Press

The AeroPress can make up to three cups of coffee, but many of the recipes will limit you to a single cup at a time. If you’re looking to replace your full-size coffee pot, the AeroPress probably isn’t the right choice. Given the quick brew, you could make 2–3 batches in the time it takes to make a single French press brew, but it would require more effort.

French presses come in a range of sizes, most frequently between 3 and 12 cups. You can easily find one that will replace a single-cup coffee maker or a full carafe. The clear winner here is the French Press.

Price of AeroPress and French Press 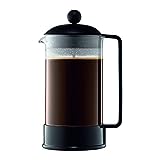 French Presses come in a much wider range of prices. You can buy a budget French press for as low as $20, or you could opt for one of the best French presses at closer to $80–150. The AeroPress is better quality than most cheap French presses, but mid-to-high-end French presses introduce extras like multi-layer filters and double-wall insulation that can be well worth the extra money. 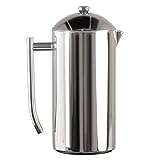 The AeroPress will draw in coffee lovers that need an inexpensive single-serve source of delicate, complex, clean coffee. It’s also a great solution for those who need a compact solution for traveling or who want a concentrated brew that can partially substittue for espresso.

The French press can offer a compact, travel-ready device, but the messier cleanup downgrades its on-the-go utility. A large French press can replace your full-carafe brewer in a way that the AeroPress just can’t. The biggest divide, though, is still the style of coffee. If you like bolder, heavier brews, you want a French press.

If you can’t find what you’re looking for in either of these options, here are a few alternatives. For delicate, clean coffee from a larger device, try an automatic pour-over coffee maker. For rich coffee, consider an espresso machine (the super-automatic ones are very easy to use). If you want a travel solution, check out some small coffee makers and small coffee grinders.