Simplicity is big in coffee. We love the easy ways to make coffee just as much as we may love the more complicated ones like espresso. This has led the community to come to love brewing methods that had fallen out of favor at one point—like the percolator and the French press.

So today, we’re going to be looking more closely at the French Press vs Percolator. We’ll look at the differences in the quality of the coffee they each make, their brewing capacities, ease of use, and more. Let’s see what each brings to the table—both literally and figuratively!

The French press uses immersion, which is just a fancier word for steeping.

Steeping is actually one of the best coffee brewing methods there are. Because it uses a metal filter that doesn’t trap the coffee oils like paper filters do, the extracted coffee ends up with more coffee oils. And these oils give coffee much of its flavor and aroma.

Steeping, then, makes for a more flavorful and aromatic cup of coffee. It also wins out in terms of the coffee’s body. Coffee brewed using this method feels heavier and thicker. This is a very enjoyable texture that adds a lot to our experience.

Not all is good news, however. The French press’s very lack of filter that helps it achieve that magnificent flavor is also the reason why so many coffee grounds leak into our cup. Coffee grounds by themselves are very bitter and add a bad flavor. Not to mention, the sensation of loose ground in your coffee is incredibly uncomfortable.

Moreover, not all coffee oils are good for you. One in particular, cafestol, has been shown to increase cholesterol levels in those who consume it frequently. So much for healthy coffee!

Percolating, on the other hand, is a form of drip coffee brewing. Instead of mixing water and coffee and letting them be together, drip coffee is all about dripping water through a filter filled with coffee grounds. Think of the classic Hario V60 or the auto-drip coffee maker you probably use now—they brew coffee simply by passing water through the grounds. 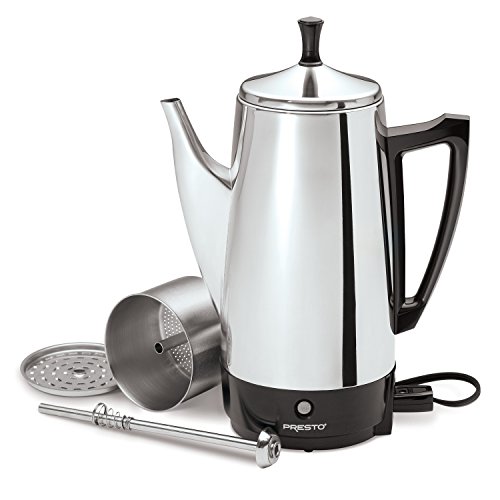 This brewing method actually has a lot of merits, as it is said to achieve a much better balance in flavor—particularly when it comes to acidity and bitterness. Drip coffee is held in high regard for its mildness in these two flavors and the overall balance resulting from it.

The primary difference between percolators vs other drip coffee makers is that percolators recirculate the water. It passes through the grounds multiple times, picking up more and more coffee flavor each time. Electric percolators control this process automatically, but stovetop percolators keep making stronger coffee (and more bitter coffee!) the longer you leave them running.

Capacity of Percolator and French Press

When you think of a percolator, you think of big batches of coffee. The percolator was designed to make a lot of coffee (in spite of quality), so one of its big perks is its capacity.

Percolators tend to be large, especially the ones used for commercial events. But you can get one as small as about four cups. The Farberware electric percolator, for example, holds four cups and can brew as few as two cups at once.

You can also find them in several other sizes, but the 8 and 12 cup models are still the most common. Percolators generally aren’t used as single-serve coffee makers.

So we can say that, on average, a percolator can brew up to ten cups of coffee. What about the French press?

French Presses tend to be smaller, but there are good reasons for that.

The French press is a… delicate issue. And I mean that literally: many cheaper French presses are made of plastic or glass, and not particularly the sturdy kind that you see with the Chemex.

This is mainly to keep costs down. A Chemex is around $50 apiece, while you can French presses for as low as $10. You can also buy stainless steel ones like the high-quality Frieling French press, but they are significantly more expensive.

So, as a result, most French presses are rather small and not really used for brewing big batches of coffee. Instead, the French press is thought of as something that you use to brew coffee for yourself or maybe you and a couple of your roommates.

Most common French presses make around 3–8 cups. That’s enough for just about any home, but it won’t replace your 12-cup drip coffee maker.

You can go bigger with the 12 cup size French presses—they look quite beautiful, but they’re very uncommon. At that size, you’ll see more sturdy materials like stainless steel and less cheap plastic. You see these mostly at coffee shops where they are used when serving many customers at one time. They’re pretty impractical for home use.

Brewing methods, after flavor, are largely ranked for their brew time. Just take a look at new home espresso machines: they all compete amongst each other over who’s the fastest brewer. This one can brew in one minute and a half. This other one only takes under one minute!—you get the idea.

And naturally, I also place importance on how long each different brewing method takes to actually brew the coffee. The brewing time will impact the flavor, as it’s not just about how long we have to wait to get that sweet caffeine in our system.

Brewing coffee with a French press takes between three and five minutes. It’s a spectrum that you control: three minutes would yield a light coffee, while five minutes yields a very strong coffee. You can choose how long you brew, depending on how strong you like your coffee.

The French press has a long brew time by most standards. Even the Moka pot, a very old manual brewing method, can take less than two minutes with the correct preparations.

Electric percolators generally don’t let you control the brew time. You don’t choose when the brew stops—it just goes until it’s done. And that is usually around eight minutes, although this depends a lot on the individual machine. Stovetop percolators give you more control, but they still take around 7–10 minutes to make a pot of coffee.

That is a very long time. By any and all standards, eight minutes is way too long for brewing coffee. And you can feel it: the flavor is lost during these long brew times, and you can mostly taste bitterness, as the other compounds that create sweetness and acidity are largely killed off as a result of prolonged exposure to heat.

It is, however, necessary. The process may be ineffective, but it yields an enormous amount of coffee with little to no effort.

French Press or Percolator: Which Is Easier to Use?

Lastly, let’s talk about the one thing I always research before buying any brewing method: ease of use.

How easy or complicated it is to make coffee a certain way influences a lot of your experience. Manual methods are great when you have the time and patience, but sometimes you just want something automatic.

The French press is, all in all, a very easy-to-use brewing method. All you have to do is pour in coffee grounds, add water, and wait. After you definitely have to master the gentle push of the plunger and a delicate style of pouring—you’d get too much sediment in your cup otherwise.

What is inconvenient, though, is having to clean it. The metal filter can be near impossible to clean up properly, and sometimes it needs to be soaked to get all the muck out. And, if you don’t clean it right away, it’s a problem.

In general, the French press is seen as a very easy-to-use brewing method. And I agree. But…

Electric percolators are insanely easy to use. They are ridiculously convenient. There are stovetop percolators that are slightly harder to use, sure, but most percolators are electric and do the whole thing on their own. Most of them have a little indicator light that lets you know when your coffee is ready.

They are usually compared to auto-drip coffee machines, and it stands. The brewing method is very similar and they are both used to brew big batches of coffee. But a percolator is so much easier. Just one button. No little digital screen, no nothing. There’s a reason most event centers use percolators when they need huge batches of coffee.

It is incredibly intuitive, and you don’t even need to be proficient in technology to work out how those stainless steel marvels work.

Moka pot vs percolator: are they the same thing?

This is a very common mistake to make because, well, they look almost exactly the same. A percolator and a Moka pot have a very, very similar—at least on the outside.

On the inside, however, they are different. The most important difference is the brewing method used to extract the coffee. The percolator works, you guessed it, by percolating. The Moka pot uses steam pressure.

The Moka pot is a very old device that was designed to mimic the steam-driven espresso machines of the early 20th-century. They use steam to create pressure, which shoots water upwards through the coffee grounds.

The percolator doesn’t really do this. As I explained before, it sends water upwards to where the coffee grounds are. Then, the drips down, and the process starts again. It is a process of repeated percolation that doesn’t really exist anywhere else outside of this brewing device. Moka pots don’t repeat the process—water only goes through the grounds once.

What does percolation mean?

Percolation is the act of extracting soluble chemicals from solid materials by passing a liquid solvent through them. That’s pretty general, though. Here, we specifically mean extracting coffee by passing (hot) water through the coffee grounds.

While this particular brewing device is called the percolator, there are actually many that use this brewing technique: The V60, the Chemex, and even good ol’ drip coffee machines use percolation to brew coffee.

What the percolator does have that makes it stand out is that it percolates repeatedly. Instead of passing the liquid through the grounds just one time, it does so several times. The liquid passes through, it comes down where it is heated and sent up again, and so on and so forth.

French Press vs Percolator: Which Is Better?

When you have two very different brewing methods such as these, it’s hard to compare them side to side and then declare a winner. Instead, pick the brewing experience and coffee flavor that sounds best to you.

If you want a quicker, easier brew that creates a full-bodied coffee, go with a French press. If you want a stronger-tasting coffee or need to brew large batches, consider an electric percolator. And if you want full control and don’t mind the risk of bitter coffee: stovetop percolators are the way to go.

If all of these methods sound like a hassle, I’d suggest checking out Nespresso machines or Keurig coffee makers. These machines are faster and more convenient than either the French press or the percolator. You can always check out my guide on whether Nespresso is worth it for more info on whether you should choose a pod-based coffee maker.