Espresso shots and lattes are some of the most popular coffee shop drinks. Even though lattes are made from espresso, the two drinks couldn’t be more different.

Before you order the wrong drink, let’s look at what’s in an espresso vs latte, what they taste like, how they are made, and their nutritional information. I’ll try to make it quick, so you can get back in time for the barista to misspell your name.

What Is an Espresso?

Espresso is a rich, concentrated coffee drink made by pushing pressurized water through finely-ground coffee. It has no additives and only three calories per shot. The only ingredients in espresso are coffee beans and water.

Espresso is the default coffee drink in Italy and much of Europe, whereas American restaurants and coffee shops default to drip coffee. These are just two different coffee brewing methods—drip coffee is brewed without pressure and with coarser coffee grounds.

What Is a Latte?

Lattes are made by combining espresso with steamed milk and topping it with milk microfoam. These drinks are very creamy, with a fairly mild coffee flavor compared to most other coffee drinks.

The ratio of espresso to milk varies depending on the recipe, but there’s always more milk than espresso. In most coffee shops, you’ll get an espresso-to-milk ratio of somewhere between 1:3 and 1:9. Starbucks, though, puts much more milk in their lattes. In that case, the ratio is 1:7 for a grande, 1:9 for a venti, and 1:11 for a tall.

Because of their mild, creamy flavor, lattes are very approachable drinks for new coffee drinkers. Lattes at many coffee shops, especially Starbucks and Dunkin, have large quantities of syrups or other flavorings in them, so they are often sweet as well as creamy.

Differences Between Espresso and Lattes

Espresso is made with just coffee beans and water. Lattes add a third ingredient: milk. That milk is frothed before it’s added to the espresso, so it fluffs up and forms a creamy foam.

You can use any type of milk in a latte, but some types of milk froth better than others. The milk you use will impact the texture and the flavor of the drink. Some types of milk are easier for beginners to froth, and each type of milk has its own nutritional pros and cons. That’s a lot more complication than with a shot of espresso.

The calorie count of a latte will depend on what milk and other additives are in it as well as the size of the drink.

A 12-ounce latte made with 1% fat milk and no syrups will have about 140 calories. A grande Starbucks blonde vanilla latte, made with their default 2% milk, has 250 calories and 60 calories from fat. Even nonfat milk has calories.

You can try using milk alternatives like soy, almond, or hemp to cut the calories to a minimum. But no latte will have as few calories as a shot of espresso.

Since they have no milk, a shot of espresso is only about 1 ounce. Even if you order a double, it will only be about 2 ounces (or 3 for a triple). Lattes are generally at least 8 ounces and sometimes as large as 20 ounces.

When you order a shot of espresso, it will typically be served in a small shot glass. Lattes are served in larger mugs. This can be a standard coffee cup, but it’s often much wider to allow for latte art.

When you pull a shot of espresso, it ends up with a layer of foam on top. Unlike the foam on a latte, this foam is made entirely from coffee. It’s an extra flavorful, highly aromatic component that adds some texture atop a cup of espresso.

Crema is very fragile, so it entirely goes away when you add milk to the drink. That’s why lattes don’t have crema, not that you would notice it under the layer of milk foam anyway.

5. Espresso can be used to make other drinks

There’s nothing wrong with drinking espresso alone, but it’s also a highly versatile ingredient for making other coffee drinks. You can add water to espresso to make an Americano. You can add vodka and liqueur to make an espresso martini. There are a near-infinite number of possibilities.

You can add flavored syrups and such to lattes, but the possibilities are much more limited. After all, it already has twice the ingredients of an espresso shot.

Equipment-wise, espresso is relatively easy. You can get a good espresso machine for under $1000 or a budget espresso machine even cheaper than that. The learning curve is somewhat steep on those machines, though, so some people opt for the more convenient capsule-based Nespresso Vertuo machines instead. 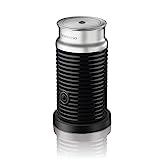 To make a latte, you also need a milk frother of some kind. Depending on your budget, you can go as cheap as a manual frothers like the Ninja Easy Milk Frother or shell out for a fully automated frother like the Nespresso Aeroccino 3. Most espresso machines come with a built-in steam wand, which lets you make lattes without an additional frother.

Espresso vs Latte vs Cappuccino vs Macchiato

Lattes aren’t the only milk-containing espresso drinks. Lattes and cappuccinos have the same ingredients, but cappuccinos use less milk. You can also make a cafe macchiato, which has only a tiny amount of milk.

This is just the beginning of your coffee journey. If you’re interested in more coffee shop drinks, I recently compiled a list of the strongest Starbucks coffee drinks that might interest you. If you want to learn more about coffee drinks, you can learn about drip coffee and red-eye coffee.

And if you want to become a home barista, there’s one skill you should definitely master first. Lattes, espressos, and any other coffee drink are better once you learn how to grind coffee beans the right way.