Have you ever wondered which Nespresso capsule has the most caffeine? I’ll give you a hint: It’s an OriginalLine pod.

For that and other Nespresso caffeine content information, look no further. These lists contain everything you need to know about the weakest and strongest  Nespresso pods, how the intensity scale impacts caffeine, and more.

What’s In a Nespresso Pod?

Each Nespresso capsule is filled with a few grams of fine-ground coffee beans. The exact amount and type of coffee beans will vary by variety and size, but that’s really all that’s in them. They are tiny aluminum pods filled with the same stuff you put in your drip coffee maker or espresso machine.

All Nespresso capsules have an intensity rating associated with them. There’s a common misconception that this number tells you about the caffeine content. However, the scale is really about the body, bitterness, and roast level of the coffee. Higher intensity ratings mean a heavier body, more bitter coffee, and more flavorful solids.

In many cases, higher-intensity coffee pods will also make stronger coffee (by stronger, I mean more caffeine). That’s because stronger flavors tend to mean more Robusta, a type of coffee bean that has more flavor than the standard Arabica beans.

That won’t work in all cases, though. Darker roasts tend to be more intense, but they don’t necessarily have more caffeine. The coffee-per-capsule can also vary, which will impact the flavor intensities and amounts of caffeine differently.

Since we can’t rely on the intensity to tell us the caffeine content, let’s just go straight to the ingredients list and nutrition info. That’s where we’ll find the real amount of caffeine in these pods.

Nespresso doesn’t list the caffeine content for their capsules on their US website. For some reason, though, they do have that information on their Taiwan page, at least for the OriginalLine capsules.

These are the total caffeine contents, not per ounce. Just keep in mind the OriginalLine pod sizes:

Palermo Kazaar is clearly the most caffeine-heavy OriginalLine Nespresso capsule. At 120 mg for a Ristretto, it’s about three times as caffeinated as the average pod!

Ounce-for-ounce, Napoli is the second-highest, although its total caffeine content is slightly less than Cape Town Envivo Lungo. You may have noticed that Palermo Kazaar and Napoli are also the two highest on the intensity scale.

I’ve left the decaffeinated coffee pods off this list because they have sparingly small (a few milligrams) amounts of caffeine. At moderate coffee consumption levels, that’s not really enough to impact any but the most caffeine-sensitive individuals.

Nespresso has done a great job of hiding their VertuoLine capsule caffeine information. Their website gives wide ranges for each size, but they don’t have any specifics.

I was able to find the exact caffeine content for only a handful of Vertuo pods. Fortunately, the ones they publicize are the most heavily caffeinated capsule varieties, so I can at least point you to those. The list below specifies which varieties are exact numbers and which are estimated from ranges and other content provided by Nespresso.

These are the five main sizes of VertuoLine capsules. There’s a sixth size that is exclusive to the Vertuo Next, but I left it off this info since it’s not as common and not single-serving. 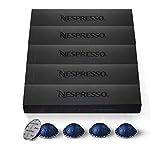 If you want the heaviest dose of caffeine, your best options are the Fortado and Diavolitto. Neither is as strong as the strongest OriginalLine pods, but the Diavolitto has a higher caffeine dose than anything else in the Vertuo pods. It’s also stronger than any of the Espresso-sized Original pods.

There you have it, the Nespresso caffeine content for their OriginalLine and VertuoLine pods. With these lists in hand, you can seek out (or avoid) the strongest Nespresso coffee capsules and espresso pods.

If you want even stronger coffee, you should consider getting a reusable Nespresso pod and filling it with one of the highest-caffeine coffees. That way you have control over your caffeine levels.

Looking for more info about Nespresso? I recently did a deep dive on DeLonghi vs Breville Nespresso machines. If you are particularly interested in the VertuoLine, the differences between Vertuo and VertuoPlus or Vertuo Next vs VertuoPlus coffee makers could also help you decide on your next capsule machine purchase.