“Strong” is one of the most confusing words in the coffee-lover dictionary. Sometimes, stronger means bolder and more flavorful. Other times, it means more heavily caffeinated. Sometimes it can even mean both.

So what does the Keurig strong button do? Let’s take a look at what the strong button on your Keurig does, how it works, and other ways to make Keurig coffee stronger.

What Does the Strong Button Mean on a Keurig?

The strong button makes more flavorful coffee. Many coffee drinkers find Keurig coffee to be weak, acidic, or sour, and the strong button was added to counteract those concerns. It causes more sweet and bitter compounds to be extracted from the grounds, resulting in a fuller, more balanced brew.

How Does the Keurig Strong Button Work?

In short, it slows down the brewing process, giving the water more time to extract the grounds.

But why does that matter?

The flavor, texture, and aroma of coffee come from a delicate mix of acids, oils, and sugars. Some of these compounds extract more quickly than others, so the length of the brew has a huge impact on the characteristics of your cup of joe.

The acids and some of the more sour compounds are the easiest to extract from coffee grounds, so a quick brew is typically acidic and sour. A slightly longer brew will extract the sugars, resulting in a sweeter, more complex brew. You don’t want to over-extract the grounds, though, because the bitter compounds come off last, and you want to leave most of that in the grounds.

Because of how Keurigs work — particularly their use of pressurized water — they can brew coffee much faster than a drip coffee maker. A typical Keurig brew takes about 30 seconds. The strong coffee button doubles that time to about one minute. That extra 30 seconds is enough time to grab lots of extra sweetness and a bit of bitterness from the grounds, resulting in a cup of coffee that will taste much more like standard brewed coffee.

Probably not. The strong brew might grab a bit more caffeine from the grounds, but it’s going to be a negligible difference. A bold brew doesn’t always have a lot of caffeine, especially when it just comes from slowing down the brewing process. 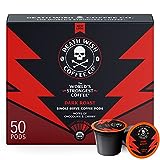 If you want more caffeine from your Keurig, you are better off buying strong coffee k-cups or buying a refillable k-cup and filling it with a high-caffeine coffee.

Which Keurig Models Have a Strong Button?

The strong brew button was not in any of the original Keurig lines. Even though it’s been around for a couple of generations now, there are still some machines in the Keurig line that don’t include it. In particular, some of the smallest Keurig coffee makers and lower-end models will likely never have a strong brew option.

Models with a strong brew button

Models without a strong brew button

If the strong button isn’t producing flavorful enough coffee for your taste, there are a couple of additional steps that you can take. 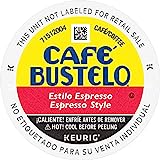 The coffee pods you use really do matter. More flavorful options like espresso k-cups can add extra richness and punch to your brew. Some of the best coffee k-cups even add extra grounds, and the higher coffee-to-water ratio produces a deliciously vibrant coffee experience.

Even better, you can forego the pre-filled pods. Reusable k-cups give you the maximum control over your brew. You can fill them with freshly ground espresso beans, cold brew coffee beans, flavored coffee beans, or other intense varieties of coffee.

2. Take advantage of other Keurig features

Some Keurig models have started adding water temperature controls, which can have a significant impact on the flavor of the final brew. That brew setting is one of the major differences between the K-Select and K-Elite. Especially when combined with the strong brew button, this can be a powerful tool.

Most Keurig models now have at least three cup sizes to choose from. For the most part, all of those sizes will result in coffee that has the same strength and flavor. However, you can make better Keurig coffee if you avoid the 12-ounce cup size. Most k-cups don’t have enough ground coffee for that large of a cup, so the flavor is typically weakened.

If you’re lucky enough to have a Keurig like the K-Supreme that has multi-stream technology, you’ve probably already noticed the quality difference. Older Keurigs tended to shoot water straight through the middle of the coffee capsule, often wasting the outer edges of the grounds. The multi-stream offers better capsule coverage, which results in consistently more flavorful coffee.

Do Other Coffee Makers Have a Strong Button?

Strength control buttons have become increasingly popular features on other coffee makers. Ninja coffee makers were one of the first brands to introduce this feature, and their flagship model, the Ninja CP307, now has five strength settings!

Many of these machines don’t control their brew strength the same way as the Keurig does. Instead of just slowing the brew, they will often tweak the coffee in multiple ways.

Breville’s Precision Brewer, a popular automatic pour-over coffee maker, is probably the best example of this. It allows you to customize the strength of your coffee by adjusting the water temperature, flow rate (basically brew time), and what’s known as the bloom time (a pre-brewing step). Breville’s machine has five presets for these settings and also allows you to define a custom preset.

Stronger Keurig Coffee Is Only a Button Away

Keurig lovers don’t have to deal with weak coffee. The strong brew button and Keurigs newer coffee-strength features are absolutely amazing. If standard Keurig coffee is too weak or acidic for your taste, it’s definitely worth trying their stronger brew option.

Even with this setting, Keurig coffee isn’t for everyone. If you want a more flavorful single-serve coffee option, the Nespresso Vertuo or VertuoPlus are excellent pod-based alternatives. If you are willing to ditch the pods, the AeroPress offers another fast, easy-to-use brewing experience, with fun recipes like AeroPress espresso and AeroPress cold brew.