Choosing the perfect Keurig comes down to just a handful of features. In this article, we’ll look at all of the differences between the Keurig K-Express vs K-Compact.

Depending on the machine, you may have as many as five single-serving Keurig coffee cup sizes to choose from, ranging from 4 ounces to 12 ounces. Some of the smallest coffee makers (K-Mini, K-Mini Plus, K-Slim) don’t have a size selector; instead, they brew with as much or as little water as you add to the reservoir.

All current Keurig models take the same pod size, so the brew size does impact the flavor. Most machines will maintain good flavor up to the 8-ounce cup size. The average coffee lover will notice a weaker flavor at 10 ounces, and the 12-ounce cups will disappoint anyone that doesn’t enjoy watery coffee.

Along with single-serve coffee, the K-Duo line of Keurigs can brew an entire carafe of drip coffee. All of these machines can brew 8, 10, or 12 cups of coffee at a time, and all but the K-Essentials can brew 6 cups as well.

Some of these machines (K-Duo, K-Duo Essentials) have a standard glass carafe like you would find on most drip coffee makers. The K-Duo Plus has a stainless-steel thermal carafe that maintains the temperature of the coffee for several hours without the burnt flavor you get from leaving coffee on a hot plate.

All Keurigs have a water tank, but the size of the home machine tanks can vary from single-cup (K-Mini, K-Mini Plus, K15) to 78 ounces (K-Supreme Plus, K-Supreme Plus Smart). Those largest tanks can brew up to 9 8-ounce cups or 13 6-ounce cups without the need for a refill.

Several recent Keurig models have removable water reservoirs. This feature makes refilling the tank easier. More importantly, though, it allows you to clean the reservoir in your sink.

The K-Supreme and K-Duo Plus models feature an adjustable water tank, which can be positioned beside or behind the brewer. This is an improvement for those with limited counter space as you have two options for how to fit the brewer into your kitchen.

The old Keurigs made weak coffee. Newer Keurigs make much better coffee, but some coffee fans were looking for stronger coffee. The company’s response was the Keurig strong button.

The strong button slows down the brewing process by about 30 seconds. That extra time allows the water to pick up more oils, acids, and sugars from the ground coffee, resulting in a much more flavorful brew.

I would call this feature a must-have for those used to drip coffee.

Most Keurigs brew at 192 degrees Fahrenheit. A few higher-end models (K-Elite, K-Supreme Plus, K-Supreme Plus Smart) allow you to tweak the hot water temperature in a small range. In the case of the K-Elite, that range is 187–192 degrees, and the K-Supreme Plus’s presets do not specify the actual temperatures.

This feature offers a bit of extra customization that is nice for some beverages, but most users probably won’t find it particularly useful.

You can pour any hot coffee over ice to make iced coffee, but it will come out weak. Even the Keurig strong setting is not enough to withstand the watering-down effect of a glass of ice.

Much like the iced coffee setting on some of the best Ninja coffee makers, this feature brews the coffee hotter and stronger than the standard brew setting. This richer brew is able to withstand the dilution from the ice, letting you enjoy a flavorful cup of iced coffee.

The Keurig K-Cafe and K-latte are able to brew lattes and cappuccinos along with regular coffee. Both of these machines include a milk frother that is made of either stainless steel (K-Cafe) or non-stick plastic (K-Latte).

They still use standard k-cup pods for the coffee, and the frothers can be used with any type of milk.

Keurig is continuing to improve the strength and flavor of its coffee, and MultiStream is the biggest Keurig enhancement since the strong button.

Most Keurigs shoot pressurized water through the center of the k-cup. Coffee grounds around the edge of the pod are often under-extracted, meaning that some of the coffee flavor is left behind in the k-cup.

MultiStream fixes this by shooting multiple streams of water into the pod, spreading the water across the entire interior. That ensures that all of the grounds are fully extracted, producing amazing coffee that is richer and much more flavorful.

If you are coming from a traditional coffee maker, brewers with MultiStream technology (K-Supreme, K-Supreme Plus, K-Supreme Plus Smart) will match your coffee tastes far better than other Keurigs.

Many older Keurig models didn’t have space for a standard travel mug to fit under the nozzle. That’s no longer an issue, as every modern Keurig can brew directly into your travel mug.

Almost all current Keurigs have an auto-off feature. This shuts down the brewer to save energy after either 5 minutes or 2 hours, depending on the model. 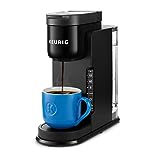 The Keurig K-Express is designed to be small and simple, with almost none of the newer Keurig features. It is one of the cheapest Keurigs to include the strong brew option.

Unlike the K-Classic line, though, it does have a removable water tank for easy refills and cleaning.

The Keurig K-Compact is technically a Walmart exclusive, but you can still find it on Amazon. In many ways, it resembles a thinner version of the Keurig K-Elite or K-Select, with a smaller, removable water tank.

The K-Express has a significant advantage for small kitchens with its thinner frame, and its larger water reservoir is great for heavy coffee drinkers. Most importantly, though, it has the strong brew button, which more than makes up for its lack of a six-ounce cup size.

The K-Express and K-Compact are some of the lowest-end Keurig brewers. If you want to maintain the tiny size but with better-tasting coffee and more features, you should also check out the K-Supreme and K-Supreme Plus. Even better, you could check out Keurig’s new smart machine: the K-Supreme Plus Smart.

Please confirm deletion. There is no undo!